From aggypedia
Jump to: navigation, search
Back to the Top

One of the most revered individuals in the history of Texas A&M University is Brig. Gen. Lawrence Sullivan Ross, CSA (Ret.), a former “Indian killer” and Confederate general who is widely accepted as being responsible for ordering the Civil War-era cold-blooded murder of African American troops serving in the U.S. Army who had been taken prisoner outside Yazoo City, Mississippi, in February 1864. For this reason, and many others, southern wartime papers pridefully referred to Ross as “the gallant Texas negro killer,” a name that stays with him to this day. Seen by his contemporaries as "a lying four flusher," Ross was held in low esteem by many who knew him well. [1] 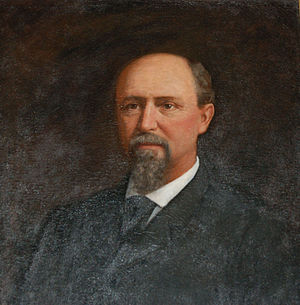 Brig. Gen. Lawrence Sullivan Ross, CSA (Ret.)
Ross’ motivations for engaging in warfare against Native Americans from 1858-1861, and against the United States Constitution from 1861-1865, have been claimed by his supporters to be supremely virtuous and honorable. In reality, Ross’ motivations were clearly summed up in a 1920s-era biography of Ross written by his daughter, Elizabeth "Bessie" R. Clarke[2]. Clarke states unequivocally that Lawrence Sullivan Ross’ military actions were driven by one ambition — to establish the supremacy of the white man. Hence, it is from his own direct flesh and blood that we know Lawrence Sullivan Ross killed people of color because he was a white supremacist.

Sul Ross - "Gallant Texas Negro Killer"
There are no credible accounts of Ross personally involved in the murder of any Black Texans or persons of color after the time he gained his reputation as "the gallant Texas negro killer.” But whether it was tacitly encouraging blatant and widespread civil rights abuses while he was governor, or not reforming the virulently racist curriculum being taught on the Texas A&M campus while he was the institution’s highest ranking administrator, time and time again Ross failed in the duty he owed his fellow Texans.

As is typical of white supremacists today, Ross was very public about his racial sentiments when speaking of “the negro problem,” letting it be well known he believed whites to be “stronger in intelligence” than Blacks[3]. This and the other exhibitions of his virulent racism made him an extremely questionable choice to be named as the eighth president of Texas A&M in 1890, at least by some. Understanding teachings on the A&M campus included faculty lectures on “the abomination of African citizenship,” delivered mostly by former Confederate soldiers to students seen as “Keepers of the Lost Cause” (and dressed in uniforms of Confederate gray) make the reason for choosing Ross obvious.

Sul Ross shrine on Texas A&M campus
In Texas in 1885, 2,921 Black teachers taught 123,860 students. Ten years later, the number of teachers had decreased by 400 although the number of students increased by 10,860.[4] Black education under Ross's "leadership" declined. It didn't prosper. Whatever Ross' supporters claim Ross did to support Black education, it had no long-term beneficial effects that lasted even five years past when Ross left the governor's office to take over supervision of A&M and Prairie View. John B Rayner, a prominent Black leader in Texas during Ross' governorship, summed up the Black education system in Texas of the time, saying "The free school system of Texas is a mental blight, a conscience paralyzer, and a soul destroyer."[5]

By 1890, Ross’ last year as governor, there were almost 9,000 schools of all types in Texas but only one Black high school in the entire state. Fort Worth schools reported no black students whatsoever past the eighth grade. When Ross’ term as governor ended, the state school superintendent reported relatively few Black students in History and English Composition courses and almost none in Algebra, Geometry, Philosophy, or Physiology.[6] Unquestionably, Ross had no meaningful or productive long-term impact on Black education in Texas.

A population of educated Black professionals would have provided competition with whites for well-paying jobs. In theory, the entire state would have benefited from healthy economic competition. Ross favored (and installed at Prairie View) a curriculum largely designed to keep Black Texans, even at the highest levels of education available to Blacks, mired in low wage and manual labor pursuits such as shoe making, carpentry, and bricklaying. In Ross’ time, Blacks saw education as “the key that would open doors which separated the slave from the freeman as well as divided poverty from wealth.”[7] By limiting the educational opportunities offered Black students at Prairie View and by perpetuating virulent racism on the campus of Texas A&M, Brig. Gen. Lawrence Sullivan Ross, CSA (Ret.), the “gallant Texas negro killer,” the man who killed untold men “to establish the supremacy of the white man,” ensured that key was kept from the hands of Black Texans, depriving those students under his charge of the opportunity for a full, meaningful life and compromising the best interests of the people of Texas to this day. All to "establish the supremacy of the white man."

Ross would continue to lead Texas A&M and Prairie View A&M until early 1898 when, while on a hunting trip with friends, Ross ingested breakfast biscuits laced with rat poison.[8] He died a few days later and is buried in Waco, Texas.

As explained by one member of a committee formed by university administrators to “consider” placing a statue of Gaines on the A&M campus, the effort was thwarted by white alumni “up in arms over the suggestion a Black man founded Texas A&M.”[9]